In order to define a realistic search area for Earhart’s Electra in the Pacific Ocean based on the Date Line Theory, we can look at the specific coordinates towards which Fred Noonan was aiming and then move outward from that point to define a probable area for where Noonan and Earhart may have been flying prior to exhausting their fuel supply. Rather than make assumptions about the actual course of their flight (such as whether or not they used a Line-of-Position approach or turned North or South to intersect this LOP), we can use the celestial navigation information to define a coordinate for “Fred’s Howland” – the point on the map towards which Noonan was directing the flight.

However, if Noonan used the wrong date in his calculations (July 3rd), the coordinate he was aiming for would have been one degree westward in longitude from Mapped Howland. Noonan would not have drawn it this way on his charts, of course. He would have perceived this date error as moving their own position on their flight path one degree eastward, putting them roughly 60 nautical miles closer to Mapped Howland than they actually were at the time of that celestial reading. If Noonan thought they were 60 nautical miles farther eastward toward Mapped Howland than they actually were, then relatively speaking, the point he was aiming for on the map was 60 nautical miles closer westward from Mapped Howland. We can refer to this coordinate as Fred’s Howland.

Fred’s Howland is the actual position Noonan would have been directing Earhart to fly towards – where he would have thought the island was located based on the incorrect date in his calculations. This coordinate is also the location where Earhart would have reported on the radio that she was “on you, but cannot see you.” This point is roughly 65.9 nautical miles at a bearing of 269.5 degrees from Actual Howland Island. It is outside of Elgen Long’s defined search area, but just on the edge of his 65 nautical mile radio circle – within the practical reaches of Long’s analysis of radio signals and strengths.(1)

If we take this coordinate to be the point Noonan was aiming towards, then we can use the same rationale Elgen Long used to draw his search box around Mapped Howland.(1) Noonan and Earhart would have arrived on site, and once they couldn’t find the island on the first pass, they would have began a search pattern, flying along their advanced line of position. In Long's estimation, it is most likely that Noonan would have kept them flying close to this original point, so as not to stray farther from their calculated destination. It is suggested by Long and others that the last set of radio calls from Earhart is indicative of a flight path running North and South along the 157-337 line of position while Noonan and Earhart looked for the island. They would have exhausted their fuel supply near their calculated destination and crashed into the Pacific Ocean.

In keeping with Long's research (and trying to stick purely to Celestial Navigation-derived notions for the Date Line Theory), we can draw a similar box around Fred’s Howland according to Long’s flight estimations and celestial navigation error calculations. This search box is derived assuming that Noonan and Earhart flew North and South along the 157-337 line of position, searching the area where they believed Howland Island to be for roughly an hour after they arrived on site. The LOP is drawn, in this case, through the coordinates for Fred's Howland Island, and expanded from there based roughly on Long's flight time calculations(1). The size of this search area is about 3200 square-nautical-miles, but it seems most probable that the Electra would be in a smaller area closer to the coordinates for Fred's Howland. 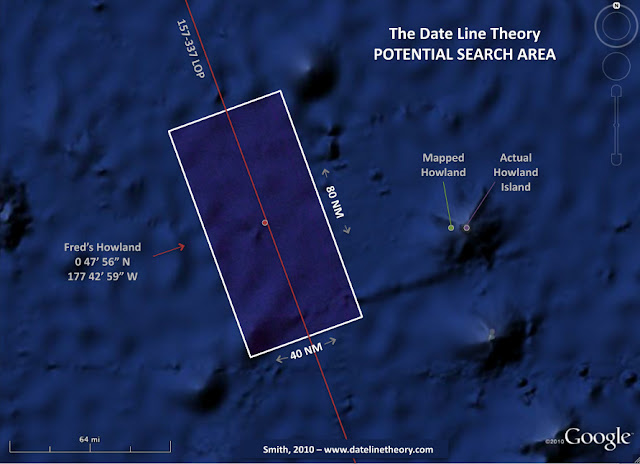 A Quick Note on “Error”


NEXT: Some final thoughts...