Liz Smith is a science communicator and filmmaker. She holds an undergraduate degree in Astronomy from Whitman College and a Master of Fine Arts in Science and Natural History Filmmaking from Montana State. She worked at the NASA Goddard Space Flight Center as a media producer, creating films and web content for NASA’s Astrophysics Department; and she is currently a media and communications consultant for varied science, conservation, and non-profit organizations. Liz is a member of American MENSA and the flying Ninety-Nines, and is a private pilot. You can contact her at datelinetheory at gmail dot com.

My interest in Amelia Earhart is as old as I am. Like many tomboys, I dreamt of flying around the world like Amelia, and I seized every opportunity in school to do reports on her accomplishments, including dressing up as the famed aviatrix for a grade school presentation. I was incredibly lucky to be introduced to the real world of flying by my father, a private pilot, who took me to the Palo Alto municipal airport every Sunday to "plane-spot" and hang out in the traffic control tower.

In 2008, after many years of saving up the funds, I began taking flying lessons and joined The Ninety-Nines, the non-profit organization for female pilots that Amelia helped found in 1929. During my training, I had the opportunity to fly off the coast of San Diego in a twin engine Piper and land at San Clemente Island - an experience that only deepened my respect for Amelia's abilities and courage. After many hours of training and exams, and through a generous scholarship from the San Diego Chapter of The Ninety-Nines, I was finally able to obtain my private pilot license in 2009. (I recently took several aerobatic lessons and hope to continue to pursue my love of flying through aerobatics and air racing.)

Through my work as a science communicator, I also had the opportunity to participate in a large-scale deep-sea search for Amelia Earhart’s lost Electra. I spent 7 weeks aboard a research vessel in the Pacific Ocean and was able to experience first-hand the area near Howland Island where Amelia and Fred Noonan are thought to have disappeared. The expedition did not result in the discovery of Amelia’s Electra and I believe the long-lost aviatrix and her plane are still in the vicinity, waiting to be discovered. 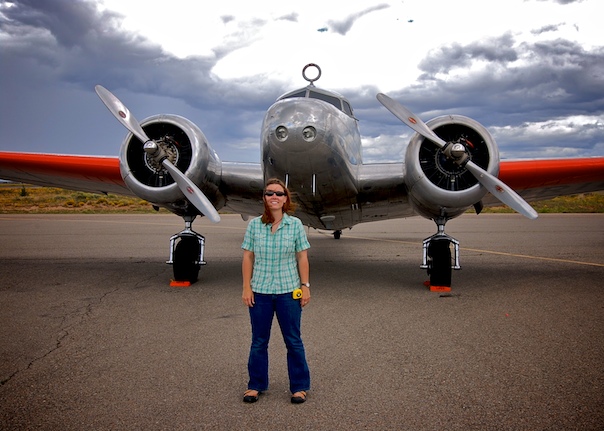 The Date Line Theory evolved while I was reading Elgen and Marie Long’s work on the subject, Amelia Earhart: The Mystery Solved. As a former student of Astronomy, I was mostly interested in the role celestial navigation played in the World Flight. I recalled one of the 8 questions on my final written exams for my degree in Astronomy. The exam problem involved determining a set of coordinates on Earth, given a particular star observation and time, as well the date. (In fact, the example given on this website of the date’s effect on location determination is the same problem given on that original exam.) Looking at the course of the flight, it became apparent to me that an error in date could have caused a mistake in the navigation and led Amelia and Fred to the wrong coordinates for Howland Island. What followed from further research and calculations was the Date Line Theory.

I do not believe the Date Line Theory to be the only solution to the disappearance of Amelia Earhart. I do believe it is possible that Fred Noonan made such an error, and I put forth the Date Line Theory as one potential solution for what happened. I also include a defined search area as a starting point for a deep-sea search for the Electra based on this theory. I do not disregard other theories and possibilities and I am a strong supporter of Elgen and Marie Long’s "crash-and-sink" theory. I will readily admit that this theory could be flat out wrong, but perhaps in the proving wrong, another curious explorer will happen upon the spark that finally helps bring us all (including Amelia and Fred) to resolution and rest.

My wish in putting forth such a theory is only to aid in the discovery of Amelia’s Electra, and put to rest a mystery that has long overshadowed Amelia Earhart’s myriad accomplishments, both inside and outside the cockpit. My hope is that the discovery of the Electra in the location predicted by the Date Line Theory will absolve Amelia of accusations of poor piloting and reckless adventuring, as well as vindicate Fred Noonan as the excellent navigator that he was. It is my belief that had it not been for one simple error, this talented and courageous duo would have made it safely to Howland Island and onward to Hawaii and California, completing their World Flight. It is time we recognize them for their achievements, rather than their disappearance.

In a strange twist of fate, I’ve found myself writing these notes in the University of Hawaii’s research library on Coconut Island off the coast of Oahu. Amelia walked the shores of this same small patch of land in 1937, contemplating her next flights across the Pacific. The island was, at the time, the private property of her friend, Christian Holmes, II, and Amelia stayed here in the days preceding her first attempt to fly to Howland Island - an attempt that resulted in a devastating crash on takeoff. Several months later, and three-quarters of the way around the world, she took off again for Howland Island, this time flying from the other direction.

After exploring the potential consequences of the International Date Line on her flight's navigation, it makes me wonder if the original flight across the Pacific Ocean westward from Hawaii would have produced a different result. Walking the shores of this quaint little island, I can only imagine that as Amelia flew, she dreamt of again seeing the towering cliffs of Oahu’s western shore from this vantage point.


*All of the ideas regarding the Date Line Theory expressed on this website are my own. All factual data regarding the Earhart flight used to construct this theory was obtained using Elgen and Marie Long’s published work, Amelia Earhart: The Mystery Solved, Simon & Schuster (1999).